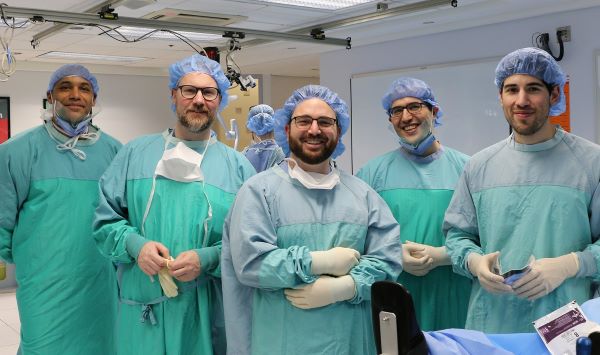 Tuition: No fees required, by invitation only (restricted to clinical fellows in hip and knee arthroplasty at the University of Toronto)

This two-day comprehensive, immersive learning experience has been designed to advance the knowledge and practice of clinical fellows in the Division of Orthopaedic Surgery at the University of Toronto. 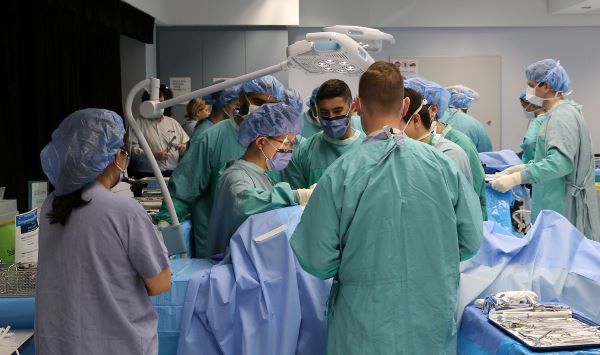 The Toronto Orthopaedics Comprehensive Hip and Knee Course is comprised of both didactic and hands-on cadaveric surgical skills stations.

Trainees will participate in interactive, evidence-based didactic sessions covering the current state of the art for arthroplasty care of patients with hip and knee arthritis and related pathology.  This includes pre-operative planning, surgical approaches, clinical and economic outcomes and maximizing value of care.

In the hands-on skills lab, participants will have the opportunity to practice surgical approaches and techniques for primary THA, primary partial and total knee arthroplasty, as well as extensile/revision surgery for both hip and knee, in small groups under the guidance and direction of orthopaedic surgical faculty from the University of Toronto Division of Orthopaedics.  They will additionally have the opportunity to gain hands-on experience with different primary and revision hip and knee implants.  Each station will have an assigned instructor to provide dedicated skills development feedback along with insights into a variety of tips to ensure successful outcomes.

Clinical fellows in hip and knee arthroplasty from the University of Toronto, Division of Orthopaedic Surgery.

At the end of the program, participants will be able to: 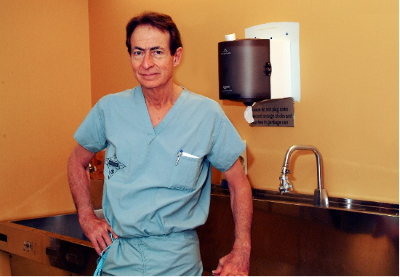 We are honoured to have Dr. Allan E. Gross, OOnt. as our Keynote Speaker. Dr. Gross is an orthopaedic surgeon at Mount Sinai Hospital with special interest in hip arthroplasty and a Professor of Surgery at the University of Toronto. Through his storied and distinguished career, Dr. Gross has amassed a reputation as a world expert in hip and knee arthroplasty, complex hip revision arthroplasty, and bone and cartilage transplantation. Dr. Gross received his M.D. from the University of Toronto in 1962, interned at Mount Sinai Hospital in Toronto, and then entered the Surgical Training Programme of the University of Toronto. As part of his orthopaedic training, he did one year of research under the supervision of Dr. Robert B. Salter, developing an animal model for cortisone arthropathy. He was the Duncan Fellow at the Toronto General Hospital working under Dr. F.P. Dewar. During this year, he developed an interest in bone and cartilage transplantation. In September 1970, he went to the Royal National Orthopaedic Hospital in Stanmore, England, where he continued his work on the immunogenicity of cartilage. He returned to the Orthopaedic Division of the University of Toronto, Mount Sinai Hospital in July 1971, where he along with Dr. Fred Langer developed a clinical and research programme in bone and cartilage transplantation. The first osteochondral allograft was performed on New Year’s Day in 1972, for a traumatic defect of a knee. A limb salvage tumour programme was initiated a few years later and a Bone Bank was then established at Mount Sinai so that preserved tissue could be used for the tumour surgery. Dr. Gross became Head of the Division of Orthopaedic Surgery at Mount Sinai in 1973 and Chief of Surgery in 1975. He became Head of the Combined Orthopaedic Unit of the Toronto General Hospital and Mount Sinai Unit in 1982, and the A.J. Latner Professor and Chairman of the Division of Orthopaedic Surgery, University of Toronto, from July 1, 1986 to July 1996. Presently, he is a full time orthopaedic surgeon in the Division of Orthopaedic Surgery at Mount Sinai Hospital and continues to speak internationally at conferences and invited lectureships. He holds the Bernard I. Ghert Family Foundation Chair in Lower Extremity Reconstructions Surgery. Dr. Gross served as team doctor for the Toronto Blue Jays for 30 years and has two World Series rings from the Jays Championships in 1992 and 1993. We are honoured to have Dr. David Backstein as our Keynote Speaker for the first annual Toronto Comprehensive Knee Course.

Dr. Backstein is an orthopaedic surgeon at Mount Sinai Hospital with a special interest in complex primary and revision total knee replacement. He serves as the Division Head of the Granovsky Gluskin Division of Orthopedics at Mount Sinai Hospital and the Medical Director of the Musculoskeletal Centre of Excellence at the Sinai Health System. He holds the rank of Associate Professor of Surgery at the University of Toronto. Dr. Backstein completed the prestigious John Insall Travelling Knee Fellowship and is an elected member of the American Knee Society.

Through his renowned career, Dr. Backstein has published extensively in the areas of surgical education and revision total knee replacement, contributed to the development of knee implants systems as a design surgeon, received numerous teaching awards and invited moderator and speaking engagements, and has been awarded numerous research grants. He has served as an Associate Editor for the Journal of Arthroplasty, Deputy Editor for Clinical Orthopaedics & Related Research and reviewer for JAAOS, Knee and the Journal of the American Medical Association.  Dr. Backstein has been invited to numerus national and international meetings to share his expertise in Knee and Hip Arthroplasty.  We are thrilled to have Dr. Backstein as the inaugural keynote speaker for the knee course.

We are pleased to host the Toronto Orthopaedics Comprehensive Hip & Knee Course at the:

600 University Ave, Level 2
Toronto, ON
(take the elevators near the Murray St. entrance down to level 2)

COVID-19 may impose restrictions and limitations on the structure of this course, and we have developed a strategy to ensure your safety. All labs will be conducted with appropriate physical distancing, and will adhere to COVID-19 protocols based on the current state of the pandemic. The safety of our participants is our highest priority.

Please keep in mind that this course may be postponed or canceled in the event that COVID-19-related restrictions become sufficiently restrictive as to compromise our ability to deliver a safe and effective educational experience.

Proof of full vaccination will be required.

Instructions to upload proof of COVID vaccination to Self Service