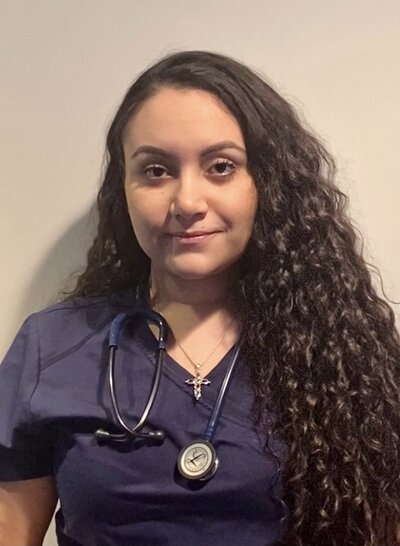 Sousna Hanna moved to Canada from Egypt in 2011. At the time, her father was already living here.

“I’m part of what is considered a minority religion in Egypt,” she says. “During that time with the Civil War and change in politics, there were a lot of attacks against members of that minority, so we decided to move my whole family to Canada.”

She continued her education in Toronto and after graduating from high school, decided to pursue an undergraduate degree in anatomy and medical cell biology at Western University in London, ON. During her program, she studied topics such as gross anatomy, immunology and oncology.

“My friend at Western graduated a year before me and was in the Respiratory Therapy program at Fanshawe College, and she loved it,” says Sousna. “I started looking more into the profession and went to The Michener Institute of Education at UHN’s Open House. That’s when I became really interested in the program.”

Sousna applied to both Michener and Fanshawe’s Respiratory Therapy programs but ultimately chose to attend Michener because it was close to home and part of University Health Network (UHN), offering the possibility of working in their hospitals.

On Saturday, June 18, she will be among more than 250 students in Michener’s Class of 2022 graduating and entering their chosen professions. Sousna will address them as valedictorian at the school’s first in-person Convocation ceremony since 2019.

“One of my favourite memories from my time at Michener was in first year when my friends and I would go into Schatz Hall after a big exam or project and blow off steam by singing karaoke,” she says.

“Another really funny memory was when some friends and I were practicing in a simulation lab on Michener’s fourth floor. I guess we practiced a little too hard because we accidentally broke one of the stretchers right off the wall! We were so scared they were going to kick us out of school for that.”

From becoming President of Student Council to acting as a student representative on the Alumni Association, Sousna was heavily involved in the Michener community throughout her three-year program. She also completed her clinical placement at Toronto General Hospital this past year and is now beginning a role with the hospital as a graduate Respiratory Therapist.

Sousna says she is a visual learner, which made learning during the pandemic difficult at times. Nonetheless, she got better at adapting to this shift and was happy that Michener was able to safely offer more hands-on learning opportunities in the later half of her second year.

“Prior to starting my program at Michener, I considered doing a master’s degree since I did a lot of work in immunology, oncology and vaccine development for cancers like melanoma during my undergrad,” says Sousna. “I’m still considering that option but not for a while as I want to settle into my career as a Respiratory Therapist first.”