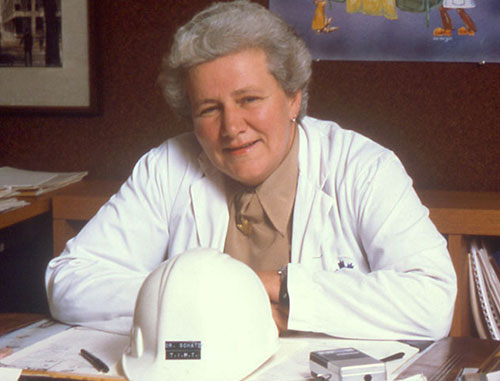 Dr. Diana Schatz, founder of The Michener Institute, has received the 2019 UHN Global Impact Award for her pioneering work in Canadian and global health care education.
Dr. Schatz’s work has supported the health care of millions of Canadians, and set the standard for medical technology education in Canada, China and the Middle East. She blazed a trail not only for health care education nationally and globally, but as one of the first female directors of a major educational institution, she paved the way for women in leadership roles in Canada.

Dr. Schatz began her career as an Assistant Chemist at Toronto General Hospital in 1958 after she finished her PhD at the University of Toronto in Biochemistry – in itself a significant accomplishment for the times. TGH built a new lab facility that year, making the former labs available as a potential learning ground for medical technologists. Before long, Dr. Schatz started the Medical Laboratory Technology pilot program at Toronto General Hospital, which represented a significant shift from an apprenticeship model to the robust theoretical, practical and clinical education that The Michener Institute remains famous for today.

Within five years, the pilot program had expanded to 12 teaching hospitals and a year later, there were enough students to warrant an application to the Ministry of Health to create a formal school. Michener’s growth continues to this day, as the Ministry of Health’s partner in preparing a superior labour force to meet emerging health care needs. Today, most applied health science programs in Canada emulate the model established by Dr. Schatz.

While developing The Michener Institute itself is highly significant, it is far from Dr. Schatz’s only contribution to global health care:

Though she retired as Michener’s CEO in 1995, Dr. Schatz has continued to contribute to global health care as a lifetime member of the Canadian Society of Clinical Chemists. She remains active in her community today, and in 2017 was awarded the Order of the Diocese of Toronto, which honours those who have given outstanding service over a significant period in their volunteer ministry. As a member of St. Anne’s Anglican Church, Dr. Schatz transformed St. Anne’s Place, one of the first assisted living seniors’ residences in Toronto, and contributed as church treasurer and president of the St. Anne’s Music & Drama Society. Dr. Schatz has also overseen all aspects of the restoration of the church, including wheelchair accessibility in 2016.

Awarded since 2004, the UHN Global Impact Award recognizes the outstanding contributions of University Health Network staff who have revolutionized health and health care nationally and around the world.

Congratulations to Dr. Diana Schatz on this honour. Check out this video to learn more about Diana and her accomplishments.

The names, photos and citations of the Global Impact Award recipients are posted in UHN hospital lobbies. Previous winners are: