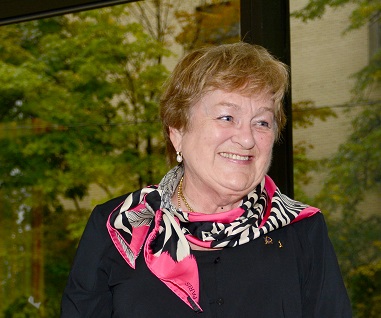 What do you remember from your time at Michener?

Twelve of us started out in a lab in the basement of the Toronto General Hospital. It was then called the Toronto General Hospital School of Medical Technology (TGHSMT). We were there for three months and then we moved up to the labs on the thirteenth floor where we rotated through the departments of Biochemistry, Haematology, Pathology and Bacteriology, for hands on training. The whole program was done in 18 months, and we even received a small stipend! Dr. Diana Schatz was the assistant head of Biochemistry. She was instrumental in the planning at the TGHSMT. She was a wonderful teacher, very patient and dynamic. She always made our experiments interesting. She was a woman far ahead of her time. We were the lucky guinea pigs.

What was it like to be a woman practicing Med Lab in the 1960’s? Do you consider yourself a pioneer?

I suppose you could call me a pioneer. I did witness advances that make life easier for patients. Tests once required far more blood. I remember using a 50cc syringe to take blood from a patient who was getting gold treatment for his rheumatoid arthritis. I felt terrible for him. I was there when the first auto-analyzer was brought in to do electrolytes. And I remember doing CO2 tests with mercury, which would spill every now and then. When I started out there were no vacutainers, you had to feel what you were doing, when taking blood. I got very good at pipetting blood by mouth. At the time we didn’t know to take the precautions they do now, and I caught something that caused me to be jaundiced, possibly hepatitis. I was able to bring a microscope home and studied my haematology there for six months.

After graduation, I was hired by the Biochemistry department. My very first shift was an overnight on July 1. There were many accident victims being brought in, and the lab was all the way up on the thirteenth floor. The emergency room was calling for results before we’d even received the samples. I thought, “Holy Toledo! Is this what this job’s going to be like?” And sometimes it was. But I never regretted any day that I worked and I never dreaded going into work, because I never knew what was in store for me. It was always so interesting.

I worked seven years before I stopped to raise my children. I met my husband in the biochem lab at Toronto General. He was in medical school, and the lab was his part time job. When he went to Boston for his residency, I went along and worked at the Deaconess Hospital. It was associated with the Joslin Diabetes Center, which was well known for diabetic care. After the children were older, I’d help my husband out at his office, doing quality control on their lab tests. I kept my accreditation up for 30 years.