When you walk into an intensive care unit simulation suite at The Michener Institute, the first thing you might notice is the life-sized manikin lying on a gurney. Then you notice that it’s breathing.

“He has a pulse, too,” says Jordan Holmes, Manager of the Centre for Advancement of Simulation in Education (CASE) at Michener, placing his fingers on the left wrist of the manikin. Sure enough, there is a steady pulse under the fleshy plastic of the manikin.

Manikins, not to be confused with mannequins, are specially created models used in healthcare education to simulate physiological and anatomical features of real patients. The manikin that Jordan is demonstrating is used to create high-fidelity simulation scenarios for Michener’s Respiratory Therapy and Anaesthesia Assistant programs. This manikin breathes, has a beating heart, it can give vocal responses like coughing, groaning and speaking and it can even vomit, should the simulation need arise.

“You can make the manikin appear to be very healthy or in various stages of physiological distress, either with their heart or their lungs or with their stomach or bowels,” explains Jordan. 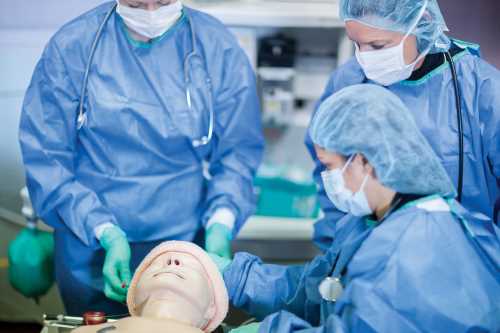 “The students interact with them as if they’re real patients,” adds Susan Dunington, Registered Respiratory Therapist (RRT) and professor of the Anaesthesia Assistant program at Michener. “They talk to them, they put monitors on them, they take vital signs from them and they use them as they would work with a real patient in the clinical setting.”

Working with the high-fidelity manikins is the final step in their training before Respiratory Therapy and Anaesthesia Assistant students enter clinical placements. Prior to this, students will train on low-fidelity manikins and task trainers throughout the program, learning basic skills and processes that will be required in a clinical setting.

“Right from day one we use simulation to teach different skills, but we start with the smaller pieces,” says Susan. “For example, they learn how to intubate on a head manikin, and it’s just the head. In another course they learn how to put in an IV or take blood using just an arm.” Later, she says, students bring it all together in a case-based format where they’re able to integrate all the processes and skills within specific scenarios.

Michener’s use of simulation-enhanced education is reinforced by research that speaks to the benefits of simulation for students, says Jordan. “They’re able to get a greater appreciation when participating in complex scenarios. There can be a lot of different factors happening at the same time, and it raises the authenticity level of what they’re engaged in.”

Raquel Rubinoff and Sara Atri, two first-year students in Michener’s Respiratory Therapy program agree. They’ve used the manikin torso and say that it has added more realism to their training. “It lets you see the vocal chords and the trachea, and they’re very realistic,” says Raquel.

Performing a simulated intubation, Susan moves swiftly. She explains every step, working with the speed and precision required to stabilize a real patient. In the event of a cardiac arrest, for instance, she says, “You’re doing this at the same time someone is pumping his chest, someone is doing blood work and tests are being done.”

“The interprofessional skills and the soft skills that come out – communication, listening, team work, collaboration, working together in different roles – all of those things take hold once you start integrating things through a case,” Susan says. “All of those soft skills, the core abilities, are reinforced in simulation.”

In addition to the two high-fidelity manikins Michener already owns for its critical care programs, the manikin that was demonstrated by Jordan and Susan is one of two models, including a paediatric model, recently acquired through a collaboration with Brock University’s Nursing program.

Respiratory Therapy Program
Anesthesia Assistant Program
CASE at Michener
Read more news stories
Facebook0Twitter0Email0
Reddit0 Linkedin0 Stumbleupon0
We use cookies to ensure that we give you the best experience on our website. By clicking “Accept All”, you consent to the use of ALL the cookies. However, you may visit "Cookie Settings" to provide a controlled consent.
Cookie SettingsAccept All
Manage consent